Create a dynamic, personal experience to tie our readers to the value of a subscription.

Use advanced aggregation of data to create an email that reflected:

This module was a little more than halfway down the email, demonstrating that subscribers were engaged with the email and continued to scroll through the experience. 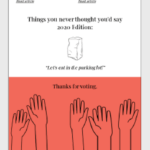 To create sophisticated personalized Welcome journeys for our subscribers.

We launched a 90-day Welcome & Engagement Journey that utilized aggregated data points to serve individualized dynamic content. The journey consists of 20 emails sent based on the subscribers individual reading habits: 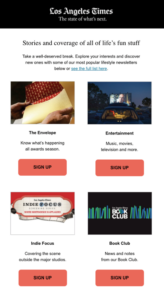 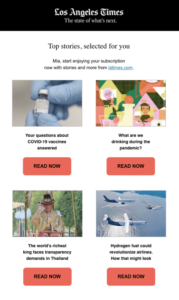 Launched a new first 100-day subscriber onboarding program to educate subscribers on all the exclusive features that come with their subscription.

Launched PD+, pressdemocrat.com/premium, with contains puzzles, comics, horoscopes, content and recipes that can only be accessed by subscribers. A new blue plus sign is showing on the homepage, to call out the features exclusive to subscribers.

Reduce digital subscriber stops and churn via an A/B test designed to reengage them with their favorite content and come back to the site.

Email active digital subscribers who experienced a downgrade (disengaged) in their engagement level or who had not been on the site in more than seven days. Target group received an RSS feed that matched their favorite content section encouraging them to come back to the website

In January 2020, we implemented desktop push notifications. We also began to manage all of our non-social push channels (newsletters, email alerts and app notifications) in a much more focused and strategic way, in terms of the content selection, frequency and what channels we use to send to which audiences.

This has led to a 15% increase in digital traffic. In any given month 40%-45% of all subscriber traffic to our site comes through email, newsletters, and desktop alerts. Before we launched desktop notifications and this new strategic approach, newsletters and email alerts only accounted for 27% of all traffic. Adding desktop notifications added another 6%-8% alone. Annual retention rates for new digital subscribers grew from 50% to 63% for a total of 26% improvement year over year. While other factors contributed to this overall increase we are attributing a majority of the increase to these changes as consumption frequency is directly tied to subscriber retention. 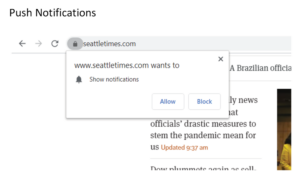 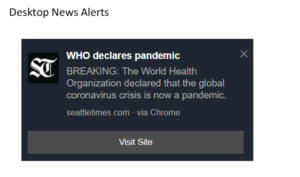 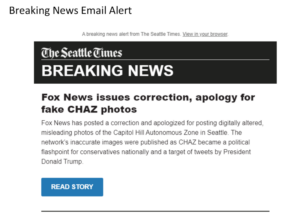 At Bay Area News Group we identified the need to package our coronavirus articles into a newsletter.

The Mercury News became the first California newspaper to launch a Coronavirus Update newsletter on March 12, 2020. The daily curated newsletter offers a comprehensive list of our local pandemic coverage. Sign ups to the mail list were promoted within our articles and in our other newsletters.

The sign ups to the mail list grew by nearly 20,000 amounting to over 67,000 recipients and generated over 1.6 million clicks over the course of 12 months, with a CTOR of 23%. In May 2020, MediaNews Group replicated this success in other markets, using it as the model for other Coronavirus Updates newsletters in Boston, Michigan and Southern California.

The goal of this campaign was to reduce churn and increase engagement through an onboarding email series that extended past a digital subscriber’s first 100 days.

The welcome on boarding series was created to span 8 email touchpoints over the first 105 days of a new digital subscriber's tenure. The series consist of emails introducing the user to our customer care team, a letter from our editor, a benefits outline, survey and more. The effectiveness of this campaign was tested using an A/B testing strategy where 20% of our new subscribers received the first two emails – a confirmation of subscription and letter from our editor. The remaining 80% of new digital subscribers received all 8 email touchpoints. We felt that it was important for all subscribers to receive their subscription confirmation and the letter from our editor. The onboarding journey was designed with subscriber renewal dates in mind, sending touchpoints around the 30, 60 and 90 day marks to reinforce the product and connect around the time subscribers were asked to make a payment.

Over the course of the campaign, users who received all 8 emails were 2% less likely to churn in the first 120 days. These users also increased their digital engagement roughly 10% more than their 2-email counterpart. The fourth email, sent 14 days after a new start, had the largest impact on churn with a difference of 4.7% between the two groups. 40% of users who opened the fifth email in the series, sent 30 days after a new start, reengaged with our digital product, compared to 30% of those users who did not receive the email. 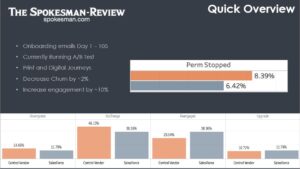 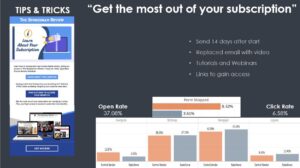 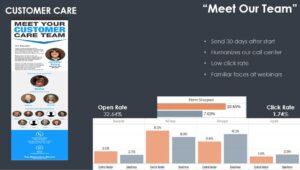 Your membership goes to support GWAA, a nonprofit organization committed to continuing education and sharing of ideas. Members get preferred rates at all GWAA sponsored events, the opportunity to network, learn revenue-generating strategies, and stay in the forefront of ongoing digital engagement. The GWAA Executive Board of Directors and Board Members look forward to your participation and support in advancing our audience development program.

Stay in the know with
GWAA news and offerings